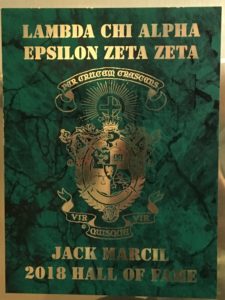 The University of North Dakota Lambda Chi Alpha chapter has awarded 2018 Hall of Fame status to Serkland Law Firm attorney Jack Marcil.  Hall of Fame status is awarded to those members who have made a lifetime commitment of their time, talent, and treasure to help keep the chapter a strong fraternity on campus.

Mr. Marcil and Gary S. Nelson were added during the 2018 celebration of the chapter’s 90th anniversary.   Other members of the Hall of Fame are: Dr. O.W. Johnson, A. B. Meeg, Web Pullen, Don Miller, John Hjellum, Duane Littlejohn, Bill Marcil, Alan Olson, Jerry Vande Walle, Ron Sitzer, Dave Hillesland, Bob Graveline, and John Gezelius.   This is an elite group of leaders from the 1,240 men that have been initiated into the fraternity at UND.

The Lambda Chi Alpha Chapter at the University of North Dakota was established in 1928 and has more than 80 members on campus.  Lambda Chi Alpha, founded in 1909, is one of the largest international college social fraternities with more than 200,000 living members.